Welcome to my second tutorial! This time I’ll show you how the collision detection and response was performed in my demos. I don’t claim that it is the best method, but it does it’s job well and it should be easy to implement it. Since I’m not a math expert, I won’t explain all details of the used equations, but I’ll try to give you a basic understanding of what’s happening. However, I assume that you already understand how vectors and matrices work. As with everything on my site, please send your questions, critics or bugs to

or visit the forum.
*Update:Please use the comments to contact me*

The idea behind the algorithm is to place some lines “through” the camera like in figure 1. The more lines you have, the more precise is the result. The lines can be placed in any way you want, so you can perform the collision detection with all kinds of shapes (figure 2). 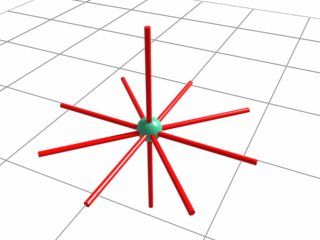 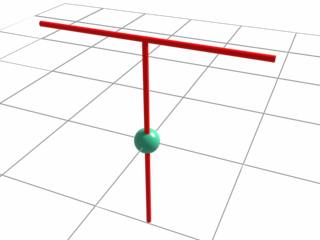 Figure 2: line setup for a “T”-Shape
Then you check for each triangle in your scene if one of the lines collides with them. If it does, the camera is moved back. The lines will be represented by rays,so the problem simplifies to some ray-triangle intersection tests.

Here are some used functions which will make the code easier to read.

First you need to declare some variables which will be used later. cdA[] stores the lines which are placed “through” the camera. Since the used line setup is symetric, you only need to define starting points. You can later put a “-” before them to mirror them.
The parameter &CameraPosition is a reference to your camera position:

Now you can convert the lines to rays. Rays are defined by a starting point, a direction and an interpolation factor t in this equation:

Then you check if the starting point of each line is on the same side of the triangle plane as it’s end point. If both points are on the same side the line also can’t intersect the triangle and you don’t need to calculate anything. From the last step you know that the plane equation can be used to tell you if a point is on/behind/in front of the plane. This comes in handy now because you only need to plug in the points of the lines:

At this point you already know that the line intersects the plane of the triangle, but you still don’t know at which point. So you need to find the factor t of the ray equation for the intersection point:

Only if all weights aren’t negative, the point is inside the triangle, also the sum of all weights is exactly 1. This means you can calculate one of the weights by subtracting the other two from 1: weight0 = 1.0 – weight1 – weight2.
To find the two other weights, you have to solve this equation:

The presented algorithm is suited for arbitrary objects in small scenes. There is still some space for optimizations to further reduce calculations, especially if you use some kind of spatial partitioning algorithm.
Discuss this tutorial in the forum